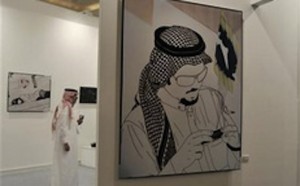 After the talk, attendees are invited to stay for an exclusive cocktail reception and a late viewing of Orpheaus Twice at David Roberts Art Foundation. A short music performance by Fulvio Caldini, Fade Control op. 47/c for four recorders will be presented at 8pm.

The discussion will be chaired by Anders Petterson, Managing Director of ArtTactic and panellists include Latitude’s Sao Paulo based research co-ordinator Dr. Ana Leticia Fialho and Alia Al Senussi, a curator, art adviser and patron from the Middle East. This talk will compare and contrast the two very unique art market hubs of Brazil and UAE looking at the role they each play in the greater regions they occupy.

RSVP to emma@suttonpr.com until Oct 16

Anders Petterson –  Panel ChairAnders Petterson is a leading authority on the art market, with particular focus on the modern and contemporary emerging art markets. He is the Founder and Managing Director of ArtTactic Ltd, a London-based art market research and advisory company set up in 2001.

Alia Al Senussi – Alia Al-Senussi is a committee and board member for a number of non-profit institutions including the Tate, Global Heritage Fund, Parasol unit foundation and Serpentine Gallery. Alia is a founding member of the Tate Committee for Middle Eastern and North African Acquisitions, on the Board of Patrons of Art Dubai as well as advisory board for Edge of Arabia and a founding member of the Middle East Circle of the Guggenheim.

Ana Leticia Fialho – Ana Letícia Fialho is a lawyer, cultural manager and art market researcher. She is currently Research Coordinator and Commercial Intelligence Consultant for Latitude – Platform for Brazilian Galleries Abroad, a partnership between the Brazilian Association of Contemporary Art (ABACT) and the Brazilian Trade and Investment Promotion Agency (Apex-Brasil).